What the class of 2019 thinks about social media

For the past three years, I’ve given a survey to first-year students (college freshmen) in my multimedia class at Drake University to see what they think about various social networks. These are journalism, public relations and advertising majors, so they should have a good interest in the way people communicate.

The survey asks them to rate social networks and to share their thoughts on how they use social media.

Want to know what’s new in social media and digital marketing?
Sign up for my weekly email newsletter.

Here are some key takeaways from the 2015 numbers (and follow-up discussions).

See also: What the class of 2018 thinks about social media 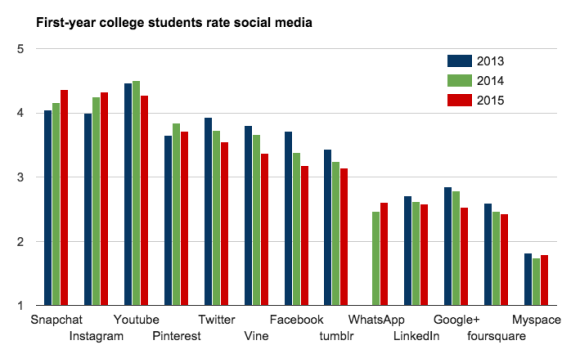 The only other networks up from last year were WhatsApp and Myspace (which is the lowest-rated network on the list).

About this year’s students

A total of 76 first-year students took the survey (last year there were 86).

They all own a smartphone (66 own an iPhone, nine own an Android and one selected “other”).

When I asked them on what device they spend the most time (smartphone, tablet or computer), 62 said smartphone and 14 said computer.

[Tweet “82% of college freshmen spend more time on smartphone than on computer.”]

I asked them to rate how they feel about social media in general (1=hate and 5=love), and the average score was 3.88. This was down from a score or 4.16 last year. Fifteen said they loved it and none said they hated it.

I asked them to rate how they feel about new technology in general, and the average score was 4.29. This is down from 4.35 last year. Thirty-two said they loved it and none said they hated it.

I asked them which networks they spend the most time on (Twitter was No. 1 last year and Instagram was No. 4):

Finally, I asked which networks they have used in the past month (Facebook was No. 1 last year):

Interested in social media and digital marketing? Sign up for my weekly email newsletter for all the latest news … See past newsletters.