How top presidential candidates are using Facebook on caucus morning

So I decided to take a look at how the top presidential candidates (the six with double-digit numbers in the latest Iowa Poll) are using Facebook to call Iowans to action on the morning of the Iowa Caucuses.

Presumably (I hope) all of these candidates are buying ads centered around these posts. So the results may not be comparing apples to apples. But we can see what they posted and what kind of engagement they are seeing.

Did they post a photo, a graphic, a video? Did they target their posts to only Iowans, or did they try to inflate their likes and shares outside the Hawkeye State? Let’s take a look… 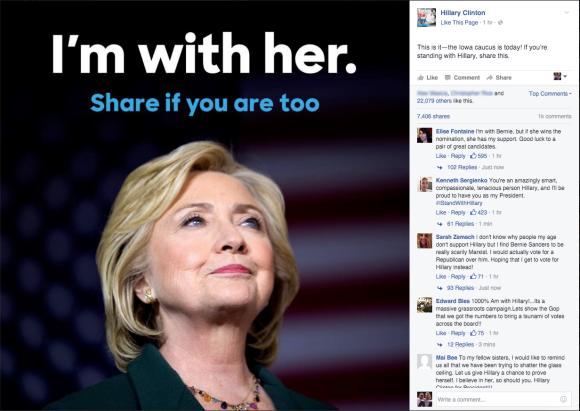 Clinton had six new posts on Facebook before noon today, and she also updated her profile photo (7:04 a.m.) and changed cover photo (8:14 a.m.) to reflect caucus day in Iowa (she was the only one to do so). 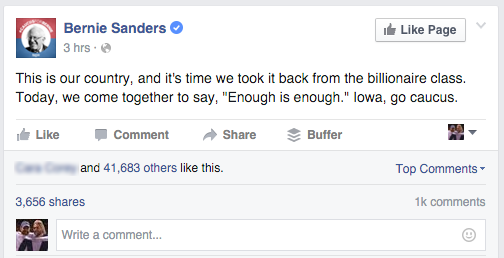 Sanders posted this text-only message at 9 a.m. to his 2 million+ followers. It was his only post before noon today.

Trump posted a video at 7:30 a.m. along with a link telling people how to find their caucus location. It was one of two posts he made before noon today – the other was a photo also helping people find where to caucus. 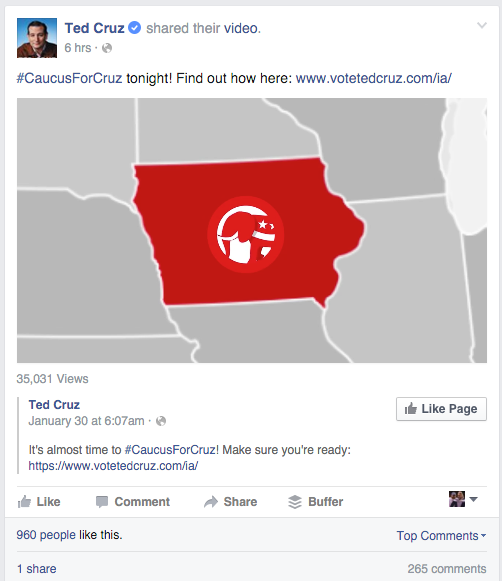 Cruz’ closest thing to a call to action among his six posts this morning was sharing this video from Jan. 30. on how to caucus. He shared the post at 6 a.m. and pinned it to the top of his page (he was the only one to use the “pin” feature). 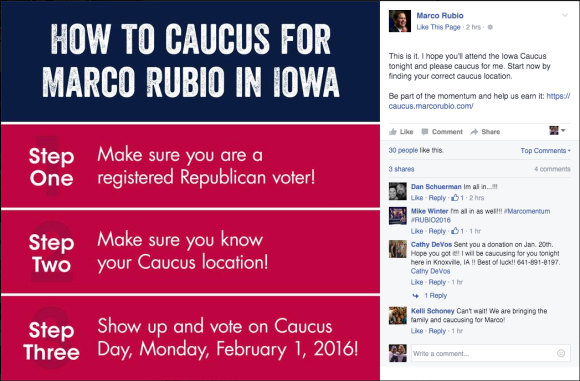 Rubio posted a graphic on how to caucus along with a link with caucus info at 10:25 a.m. Two hours later, it had 30 likes, 3 shares and 4 comments. 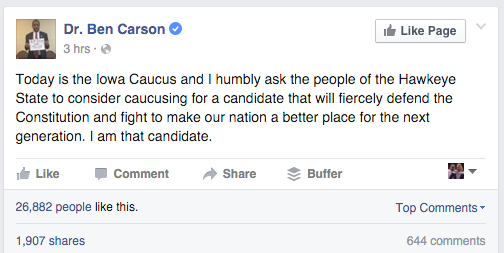 Carson joined Sanders with a text-only post – his coming at 8:47 a.m. and “humbly” asking for our vote. It was one of four posts made to his page before noon.

Obviously Cruz and Rubio’s numbers aren’t anywhere near the rest. That is likely due to Cruz sharing an old video and Rubio targeting his post. We’ll see if the two candidates can recover this afternoon.