What the class of 2020 thinks about social media

That’s the key takeaway from my annual social media survey of first-year students in the School of Journalism and Mass Communication at Drake University.

The survey asks students to rate social networks on a scale from 1 (hate it) to 5 (love it), in addition to asking them which networks they actually use. For the past four years, I’ve combined the survey with a discussion about how first-year college students feel about various social networks.

Here are other key takeaways from the 2016 results:

I also discuss the survey with students afterward. From those discussions, Twitter and Facebook come back into the mix. Students just clearly don’t “love” those networks quite as much as YouTube, Instagram and Snapchat.

Here’s how these first-year college students use those four networks:

Instagram – Sharing the very best moments of their life with friends – meaning one or two photos a week at the most (unless they’re on vacation, when they can share more often).

Facebook – Sharing an edited version of their life for family members to see (parents, aunts, etc.) Also for posting photos because there isn’t room to keep them on their phones.

How the class of 2020 rated social networks

Here is how those numbers compare to the previous three years. 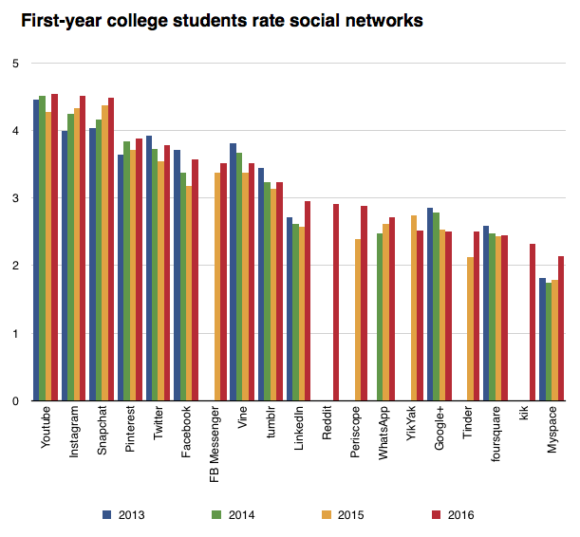 A total of 56 first-year students took the survey (last year there were 76).

They all own a smartphone (47 own an iPhone and nine own an Android).

18 of them own a tablet (a 10 percent lower ownership percentage than last year).

When I asked them on what device they spend the most time (smartphone, tablet or computer), 45 said smartphone, nine said computer and two said tablet.

I asked them to rate how they feel about social media in general (1=hate and 5=love), and the average score was 4.05. This was up from a score or 3.88 last year. Twenty said they love it and no one said they hate it.

I asked them to rate how they feel about new technology in general, and the average score was 4.39. This is up from 4.29 last year. Twenty-seven said they love it and none said they hate it.

I asked them on which networks they spend the most time:

I asked them on which networks they create the most content:

Finally, I asked which networks they have used in the past month:

Snapchat, Instagram and YouTube have clearly distanced themselves as the most important social networks in these students lives. Facebook is still a necessity for them, as evidenced by the fact more people have used it in the past month than any other networks. And Twitter is really hit or miss – either they like it or they see no use for it.

If I’m a marketer trying to reach people this age, I would invest heavily on Instagram and Snapchat.